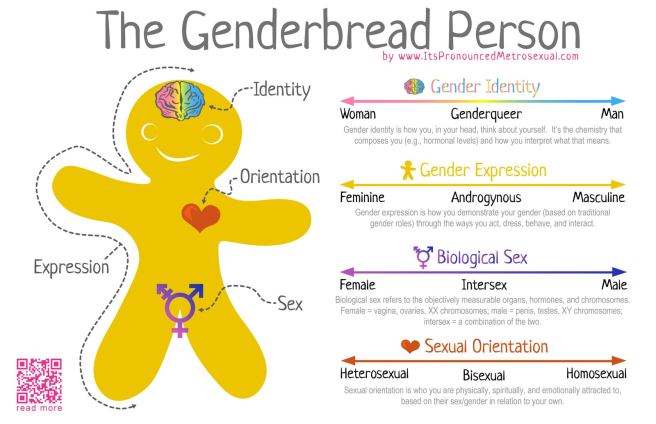 I know I’m writing at a mad clip as of late, and perhaps it will slow down soon, but when I have an idea or thought that won’t leave the brain I have two choices:

See, most of us live in a world where men aren’t supposed to talk about their feelings, or if they do, then it should only be with their spouse or maybe a therapist.  If you’re a guy and you want to make your buddies uncomfortable start talking about your feelings, or your genderfluid kid.  The look in their eyes is priceless, like a deer in headlights, or a horse that has been spooked.  They can’t change the subject, or get away fast enough.  This is because most men “express” themselves as extremely masculine.

It’s not always our fault, we’re taught to do this, even if it isn’t how we really feel.  Guys, if you’re reading this, prepare yourselves because I’m going to share.  Ladies, for most of you, I know you have no issues with this, and may even applaud me for doing so…because it is so foreign for a seemingly masculine man to do so.  As to you wondering what this has to do with transgender children, I will get to that.

My son, Fabulous, is my inspiration for this post, because he is my most favorite unique, march to the beat of his own drum person in the world.  Fabulous loves mostly girl things, and has repeatedly (more often now) said he wants to live as a girl, and he wants to be a woman when he is older.  His behavior has made me look inward, because on some level I feel a connection to him and what he is going through.  That’s why, to begin with I will share about myself as we talk about the difference between gender identity and gender expression.

What is Gender “Identity?”

When you’re a big, masculine-appearing guy, people see you a certain way, and at times there are expectations as to how you should fit into the world.  I’m a guy, and more often than not, I like being a guy.  I like how I get treated, and how people see me most of the time.  I identify male, and am good with it.  I’m not jealous of women physically, nor do I feel I am in the wrong body.

Gender identity should be easy to understand for most people, but it’s not.  You should be able to ask yourself,  “Am I a male or a female?”  How you express yourself, your gender “expression,” is a completely different issue.  You’ll notice above, I said more often than not, I like being a guy.  I don’t believe anyone is 100% anything, or if they are, then they most likely will go through life completely single (don’t know many who can handle a 100% alpha male all the time).  I think we have elements of both genders in all of us.

Mentally, in many ways, I have come to admit there is some female in me.  I like to talk way too much, and when I say talk, I mean share.  I’ve lived over forty years as a man, and other than a couple gay friends, I don’t really know too many guys who like to share as much as I do.  I’ve learned to pick up on cues, as when I’ve said too much about something.  At times, I have had trouble making friends with other men, especially those guys who express as certain masculine tendencies. .  In many cases, what they’re into, and the way they talk just puts me off.

As for the male side of me, it sometimes is hard to quantify why you feel a certain way.  I just feel more male, and know that is what I am.  I cite the above, to simply clarify that there are many cis-gender and transgender people who have elements of both genders within them.  Although maybe I’m wrong on this point, and I’m choosing to let my freak flag fly.

What is Gender “Expression?”

This is how you express yourself to the world.  This is what we know as masculine, feminine, or androgynous.  Most people tend to favor one of the other of the spectrum, but as your expression also includes your likes and dislikes, it needs to be pointed out that how you dress is just the tip of the iceberg when it comes to expression.

Gender expression is the point most cis-gendered people and even some transgender people get hung up on when it comes to how we identify as people.  People often confuse identify with expression, just as they also confuse gender with what is in your pants.  Those who have been reading my blog know that Fabulous is gender-fluid.  He will tell you he has a boy heart and a girl heart.  He presents more androgynous in his clothing choices during the day usually,  dresses as a girl at night (all night gowns), all boy at gymnastics, and sometimes on weekends, he will dress as all girl.  His hair is long enough now that if you style it up right, he looks like a petite little girl with sassy, short hair (how a friend’s 60-something year old mother labeled him, before being corrected).

Now to the part all us parents hate…what Fabulous likes.  Fabulous loves boy’s gymnastics, and inspiration struck last night when we were told that he stuck a high bar move that many boys don’t learn until they’re between 10 and 12.  He is only about to turn seven. In the past, whenever he has done something we considered “masculine,” we would think, “he’s turning the corner and about to tell us he’s a boy.”  Yeah, it doesn’t work that way, but every time things like this have happened in the past our hopes go up that he will stay gender-fluid, and that he will just grow up to a fabulous man.

My wife still has a sliver of hope as to what these events mean, I can see it, and I let her have that sliver, because this has not been easy for her. It’s the family and friends that have started to drive me crazy.  Every time those in the know see or hear about him doing something masculine they can’t help but point out, “well that’s a really boy thing he just did” or a “well girl’s don’t behave like that.”  To date, I’ve kept the smile on my face, but sometimes I want to ask them, “why can’t girls like or do those things?”

Society has set up a double standard for gender expression.  Girls can wear girl and boy clothes.  Girls can play with girl and boy toys.  Girls can like sports, cheer-leading, and dance.  Boys can wear boy clothes.  Boys can like sports.  Boys can be outspoken.  Women can say what comes to mind.  Men can be aggressive.  Women can be emotional.  I could go on and on with these expression stereotypes, but we know them all.  When someone openly ignores them, then people get uncomfortable.  We’ve come a long way since I was a kid in the 1980s and 1990s, but we still have a ways to go.

Growing up, I never said to myself “I’m a girl” or even “I want to be a girl,” but I did have moments, especially during my chubby/awkward phase around puberty where I was jealous of girls and women.  Girls talked to each other, and seemed to relate to each other better.  It was easier to talk to them, at least until sexuality came into the picture.  As for adults, it was always easier to talk to women vs men.  It was these things I was jealous of.  How come it seemed like girls and women could like whatever they wanted, and no one judged them for it.  Girls could like video games, sports, any kind of music, and guys would actually think they were cool for it.  However, if a guy liked boy bands or romantic comedies then he would be met with ridicule if other guys found out.  As I went through high school, my body continued to grow and broaden.  Muscle was easy to put on, and I embraced it.  I loved playing football and wrestling, but at the same time read the Bronte sisters and Jane Austen’s complete works.  I had always loved history, and I rationalized that was why.  There were certain things I shied away from, because I didn’t want to be seen liking something that girl’s liked (even though I probably would have liked it).  Throughout it all I kept most of it to myself, after all I would be judged negatively for it.

Now all of that said, I recognize that my expression is mostly masculine.  I can be aggressive and physical.  I love to compete, with myself, against others, it doesn’t matter, sometimes it drives me.  I still love sports, but am choosy with my time.  I watch soccer religiously (Go Chelse F.C.!), and I manage and play goalkeeper for a men’s Over 30 soccer team.  I’m not big on musicals, or romance movies, and I can’t stand arts and crafts.  There are some things women do, or ways that they react that leave me flummoxed.  I also couldn’t give two shits what most people think of me.

When I say I have a connection with my son, it is because I understand what it is like to hide things, to keep things to yourself knowing that you will be judged for them.  I also know that expressing a liking for things traditionally associated with the other gender does not make you that gender.  It simply means that you have varied interests, which I think makes you all the more interesting, and may give more insight into the other gender.  I also understand that one reason why he is eager to socially transition is because if he is seen as a girl by society then he can express himself in whatever manner he desires with less judgement than he receives now from people.

As for sexuality…well, we’ll leave that for another time.  Fabulous is only seven, and my mind isn’t ready to process that nugget yet.